Of Cabbages and Kings: Chapter Eleven

spike_1790
Summary: "Arguments are to be avoided; they are always vulgar and often convincing." - Oscar Wilde
AN: The too-amazing-for-words

theladymerlinmade me my very own banner for this. Isn't she brilliant? 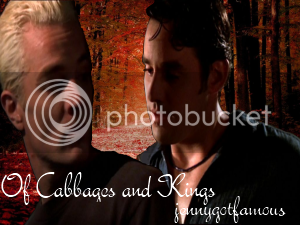 He meant to say more than that, had a whole speech rattling around in his head somewhere, but he let that sit in the air between them for a moment. Flinched at Spike’s snort of agreement but didn’t offer any defence; the vampire had every right to be put out. Eventually he took a breath and did exactly what the blond had suggested; babbled from the beginning.

“You drive me nuts. You constantly track mud into the house because you never take off those damn boots and you always come home smelling like cigarettes, cheap booze and vamp dust. You never use your own towel, even though I’ve bought you a dozen new ones. You’re always using all the hot water, even when you know I need a shower because we’ve been slimed by some stupid demon.”

He couldn’t really see Spike’s face properly in the gloom but he could almost feel the glare directed at him. Licking his lips nervously he continued.

“You’re always saving me, even when you don’t need to. Even when it has nothing to do with dragging my ass away from some demon, and more to do with my own screwed up head. You wash your blood mug out, because you know it drives me nuts to try and get dried blood out of the corners of the stupid thing and for some reason you’re attached to it. You buy me chocolate. But you hide it away in some corner of the fridge or another so when I find it I can pretend I forgot putting it there. You pick up milk on your way home, even if it is four in the morning. You quote poetry.”

Faltering for a moment, he looked up to where he hoped Spike stood.

“Yeah, I get it Harris. You’re having a moment. We done? Got places to be.”

Snapping his mouth shut Xander considered just how far from plan this was going. Chewing his lip nervously he took a breath.

“Leave it. Nice to know you turn into a bit of a tosser when you’re on the piss. You’re sorry and all that rot. Now thanks for the nice chat and all but…”

The sudden shaft of light had him blinking and he was finally able to see the vampire as he stood in the shadow of the door. Worn black jeans sat low on his hips – lower than before? Had he lost weight? – and the black t-shirt didn’t cling the way it normally did. While the pale face was mostly in shadow, Xander was more than able to make out the angry expression.

“Right, I’ll just…” Not really knowing what he’d been about to say he stumbled slightly and made his way back onto the street.

Clearly Willow had been an entire dimension worth of wrong.

Spike was a ponce. This was not a new fact, and took him no time at all to admit it. He was also a vampire who’d had time enough to admit a few home truths, though none he was likely to say out loud. While he knew the brunet had likely come to apologise – for all his ass-about-face way of actually saying the words – and had even intended to let him get it all out, he found himself unable to hear the words when it came down to it. Calling himself seven kinds of fool, he slammed the door shut with far more force than was really necessary, lit the cigarette that had been dangling between his lips for the last twenty minutes and made his way back to where he’d left the litre bottle of Jack.

Riding a rather solid buzz, he wasn’t sure how much time had passed before there was a thumping on his door. Cursing Xander and his persistence he stumbled to the door, flinging it open with impatience.

Whatever he’d been about to say was forgotten as soon as he realised it wasn’t the brunet who’d been thumping at his door; it was Willow.

“You two are the most pig headed people I know!”

“Nice to see you too, Red. Somethin’ I can help you with?” When in doubt, sarcasm never failed.

“Darn tootin’ there is! Why do you have to be such a… such an ass!”

The shocked amusement of hearing the little witch swear seemed to cover the affront at being insulted, for the moment at least.

“Oi! No need for the name calling. What the hell did I do to you?”

“Xander.” There was such a heavy inflection on the word that Spike knew better than to try and play dumb.

“The whelp was over to apologise for acting like a twit. What’s it to you?” He wasn’t going to play dumb, but he wasn’t about to lay his unbeating heart out for her to poke at either.

“Grr! How can you two be so dumb! He wasn’t here to apologise. He was here to tell you he lo-likes you. And you went and turned into the Grinch that ate Christmas, spat it out and stomped on it. Which, by the way, is just around the corner and, thanks to you, Xander’s even more of a grouch than he normally is.”

Blinking at the rapid influx of words Spike put down the bottle that had been attached itself to his hand for the last two-and-whatever weeks and cocked his head at the redhead currently glaring daggers at him.

Not nearly his wittiest comment, but he was fresh out of anything but confusion with a side of surprise.

“You heard what I said; Xander was trying to tell you he likes you and you were a giant butt head about it.” Standing in front of him with her arms crossed, irritation and worry for her best friend clouding her features Spike understood how the merry band of misfits had managed to save the world so many times; they’d walk into hell for each other. Or face off against a sloshed vampire, whatever the situation called for.

“I can hear your heartbeat, Red. Don’t think I didn’t catch that little slip of the tongue. Harris told you he loves me?” And there was not a note of wistful in there.

“Not… in so many words.” She hedged carefully.

Snorting, he picked up his bottle again, “Yeah. Didn’t think so. You chits are always making up sodding romances where they don’t exist. Lovely chat, don’t let the door hit you.”

“Oh grow up! You’ve had over a century, or however old you’ve decided you are today, to come to grips with… whatever your sexuality even is. Xander’s barely into his twenties. It took a lot of courage for him to even come over here. The least you could do would be to try and act somewhere close to your age.”

The bottle thumped softly as he put it on the floor. Spending a few moments lighting a cigarette he ignored Willow’s scrunched up face and exhaled the smoke slowly. There was a slim chance this was all some kind of prank. Wouldn’t put it past the Slayer to cook it up. Then again, there was also a chance that the witch wasn’t far off the mark and he’d basically told the boy to go take a flying leap when he was trying to… what? Confess his undying love. Spike had to snort slightly at that, but the thought stayed with him. Xander may have been there for more than a friendly apology. If that was true he’d gone and made a right cock up of it.

Looking to the tiny shaft of sunlight he could just see from the couch he rubbed his head, wondering if it was possible for vampires to get headaches.

“Think you can get the boy out of the house for the eve?” He asked, not looking at the redhead.

Clearly she’d been expecting the request, or something similar, because she held up something shiny in one hand with a broad grin on her face. It was his key.

“Wills, there’s still another week until the holiday of doom, why do we need to go Christmas shopping now?” Xander was tired, which wasn’t a new thing, but he would much prefer to be tired at home, staring at reruns of BSG than tired amongst the hordes of Christmas shoppers. And his current mood had absolutely nothing to do with a certain blond vampire he hadn’t spoken to in over a week, if their last meeting could even be called a conversation.

“Because it’s only a week until Christmas, and I know for a fact you still haven’t gotten Giles a present, and I’m leaving on the retreat with Tara the day after tomorrow, and you know you can come with me if you want to but it’s kind of a witchy thing so I wanted to spend time with my bestest friend and –”

“Willow…” He interrupted with a sinking feeling, “Just how much coffee did you have before you came and got me?”

He could swear for a moment relief flickered across her face before the wide eyed exuberance he would expect of a 3 year old was back, “Only two, but they were double shots, but it doesn’t count if it’s in the one cup, right? And the last one had chocolate sprinkles, how could I say no? Come on, we have to get to the book store. I know exactly what you should get Giles.”

Shaking his head, he let himself be dragged along. While he didn’t particularly enjoy shopping, shopping with a Willow full of caffeine was an experience he wouldn’t miss for the world. Even if it left him feeling like he’d gone ten rounds with Buffy after she’d ruined a new pair of shoes.

By the time they eventually got back to his apartment he was feeling like ten rounds with Buffy would have been the easier of the two options. And Willow was still bouncing.

“Now don’t forget to wrap those. Wrapping paper is in the green bag.” He didn’t remember buying wrapping paper, but he believed her.

“Oh! And I almost forgot! This one’s yours.” Still bouncing – and if she didn’t stop soon he was going to be motion sick or something – she handed him one of the glossy photos.

Looking down at him he couldn’t help but laugh. How she’d managed to convince him to get his photo taken with “Santa” he didn’t know but he smiled to see her grinning back at him from the small square with him sitting on the other side looking a lot like he imagined the parents all waiting in line behind the camera felt.

“Thanks Wills. You better get home before Tara thinks you’ve been attacked by the evil-shopping-throng-of-Christmas-hell.” Smiling again at her beaming face he gave her a peck on the cheek and as she bounced off, looking a lot like Tigger.

Shaking his head he juggled various shopping bags before finally managing to get his key in the lock. Shoving the door open with a foot he bundled the ridiculous number of bags inside before putting his shoulder against the wood to close it again.

Looking up he was vaguely aware of his shopping hitting the floor as his jaw dropped in surprise.
Tags: fic: of cabbages and kings, pairing: spike/xander
Subscribe